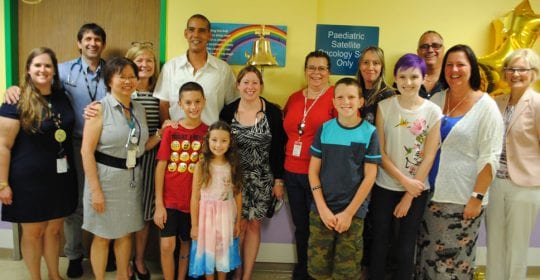 As Canada marks Childhood Cancer Awareness Month in September, Scarborough and Rouge Hospital (SRH) has unveiled its first “end of treatment bell’ for the Paediatric Oncology Group of Ontario (POGO) satellite paediatric oncology clinic at the Centenary site. This very special bell will be rung by children when they complete their cancer treatment in the clinic.

The production and purchase of the bell was generously donated by the families of two former clinic patients as a way to thank the hospital for the lifesaving care their children received.

“I absolutely love Scarborough and Rouge Hospital,” said Nicolle Georgiev, the mother of seven-year-old Sophia, who was treated for leukemia at SRH in June of 2012, and who conducted the initial outreach to organize the funding and production of the bell.

“The doctors, nurses, and other staff saved my daughter’s life and I will forever hold them all in my heart. Being able to give back was a blessing. We are so excited to be able to share the bell with the many children and families who receive outstanding care in the clinic.”

Rhonda Biener, mother of 12-year-old Jerzie LeDuc, who received treatment for a brain tumour between February 2016 and March 2017, adds that she immediately knew she wanted to be a part of the project. “I talked to my parents and they didn’t even hesitate in saying they would pay for the bell and donate it to the hospital on behalf of Jerzie,” she said.

“The nurses in the clinic have become a very important part of our lives and we will be forever grateful to them for all they did and continue to do; not only for our family, but for every other family at the clinic.”

In addition to Nicolle and Rhonda’s efforts, a close friend of Nicolle’s painted a beautiful rainbow and included a poem on the bell.

“We thank these incredible families for making such an exceptional donation to our hospital that will bring relief and hope to thousands of children for years to come,” said Liz Buller, President and CEO of SRH.

The now-widespread tradition of bell-ringing for cancer patients was introduced over 20 years ago when U.S. Navy Rear Admiral Irve Le Moyne, a patient with head and neck cancer, brought a brass bell with him on his last day of treatment. In the Navy, Irve told his doctor, sailors ring a bell to mark when a job is well done. Irve recited the following poem the day he rung his bell, which continues to be written on other end of treatment bells, including the one at SRH:

“Ring this bell
Three times well
Its toll to clearly say,
My treatment’s done
This course is run
And I am on my way!”

As a POGO satellite, the clinic at the Centenary site provides cancer care close to home for children in Scarborough. Working in partnership with the Hospital for Sick Children (SickKids), the clinic cares for between 80 and 90 patients, who come for nearly 1,000 outpatient visits and 40 inpatients stays each year.

View photos from the unveiling of the end of treatment bell.