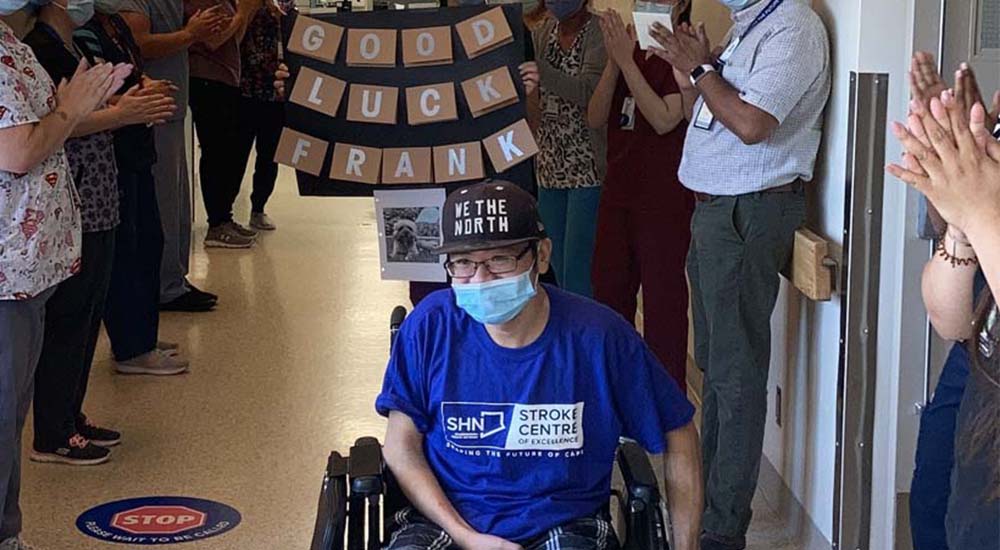 Simple tasks like showering, shaving, and preparing our own meals are so ingrained in our everyday lives that we don’t even consider what life would be like if they were taken away from us. For stroke patients, this is a reality that can happen in an instant, without warning.

To support patients who suffer from a stroke, Scarborough Health Network (SHN) opened the doors to the Stroke Centre of Excellence in April. With the launch of SHN’s new Integrated Stroke Unit (ISU) at Birchmount hospital, Scarborough has access to seamless stroke care services, improved outcomes, and a better health care experience, for the first time.

And timing was everything for the ISU’s first patient, Frank Wu, who suffered from a severe stroke at the young age of 38. While stroke in the age group of 20-59 is on the rise, it is still not as common. Age is a strong risk factor for stroke, with majority of cases happening to those over the age of 60.
“Frank was found with a hemorrhagic stroke (when a blood vessel ruptures, causing bleeding in or around the brain), likely from uncontrolled hypertension (high blood pressure),” shared Dr. Nicholas Hartmann, Medical Internist.

“When Frank first arrived to the unit he needed significant blood pressure medication, as well as insulin to manage his Type 2 diabetes. While he was here, we were able to wean him off the insulin and many of his other medications. We also helped him learn how to eat healthier and exercise regularly to help manage his diabetes.”

Frank’s high blood pressure and diabetes were key factors which contributed to his stroke, both of which are common factors of stroke in younger age groups. High blood pressure makes the heart work harder and damages blood vessels and organs over time. When this happens, blood clots may develop that prevent oxygen flow to the brain. Because people with diabetes have more sugar in their blood, changes to blood vessels can occur, increasing their risk for stroke.

With stroke services now being centrally located within the ISU, Frank was able to receive all of his care and rehabilitation in one place, working with an inter-professional team including nurses, nurse practitioners, occupational therapists, physical therapists, speech language pathologists, social workers, and so much more.

“Frank’s entire care team was dedicated and advocated for his well-being and to meet his rehab goals to ensure the best possible outcome,” acknowledged Jemini Abraham, manager of SHN’s Stroke Program. “Inter-professional team collaboration enabled the best possible outcomes for this patient, and was a testament to exceptional patient care within the ISU.”

Frank worked tirelessly throughout his time on the unit to get himself healthy and strong enough to return home. The team quickly realized his perseverance in getting stronger – a key factor in his recovery journey that played a pivotal role in enabling him to return home in early August.

“Initially Frank wasn’t able to walk or stand for himself, so simple tasks like getting dressed were really hard for him,” said Faiza Jadavji, Occupational Therapist. “But he worked so hard to demonstrate his independence. He understands his areas of weakness, so he corrects those to be able to do the things he needs to continue living on his own.”

Not only did the team support Frank through his stroke recovery, they provided care outside of what they were required to do as his health care team.
Frank came to Canada 10 years ago from China to further his education. Since then, he lost both of his parents, leaving him without a family. Going through this journey alone, the team within the ISU became Frank’s family.

Rallying together, the team raised money to help Frank purchase new clothes, toiletries, and supplies to help set him up for success.

Thanks to the communication tools he learned while on the ISU, which included writing and pointing to key words, Frank was able to share his journey. As someone who prided himself in being independent, Frank was nervous for what the future held for him after his stroke. However, he noted that thanks to the work of the team and himself, he felt confident and strong, and no longer scared for the future.

When the time came for Frank to be discharged, it was a bittersweet moment for the ISU. Hearing Frank’s laugh and seeing his smile had become a familiar part of their daily routine but while they’d miss him, they were confident that all of his hard work had set him up for success.

It was clear that Frank felt extreme gratitude for the team and the things they taught him. A highlight he shared was his happiness at being able to once again do the simple every day tasks like shaving. All of this confidence made Frank certain he’d be okay to live alone and continue to grow stronger.

The progress that Frank made during these three months shines a light on the importance of integrated stroke services, a collaborative approach to patient care, and the dedication of health care workers going above and beyond for their patients.

On April 8, the doors opened to our new Stroke Centre of Excellence. Frank was our very first patient on the unit and was welcomed by the whole team, anxious to begin providing exceptional care for their first patient.

Throughout his time spent on the unit, Frank became like family to the team. His energy, dedication and enthusiasm was a bright light on the unit and Frank became friends with every staff member he came across.

As the team says goodbye to Frank on his discharge day it was a bittersweet moment. Hearing Frank’s laugh and seeing his smile had become a familiar part of their daily routine but while they’d miss him, they were confident that all of his hard work had set him up for success.

The team celebrates Franks discharge! After over 100 days on the unit, it was time for Frank to finally head home!