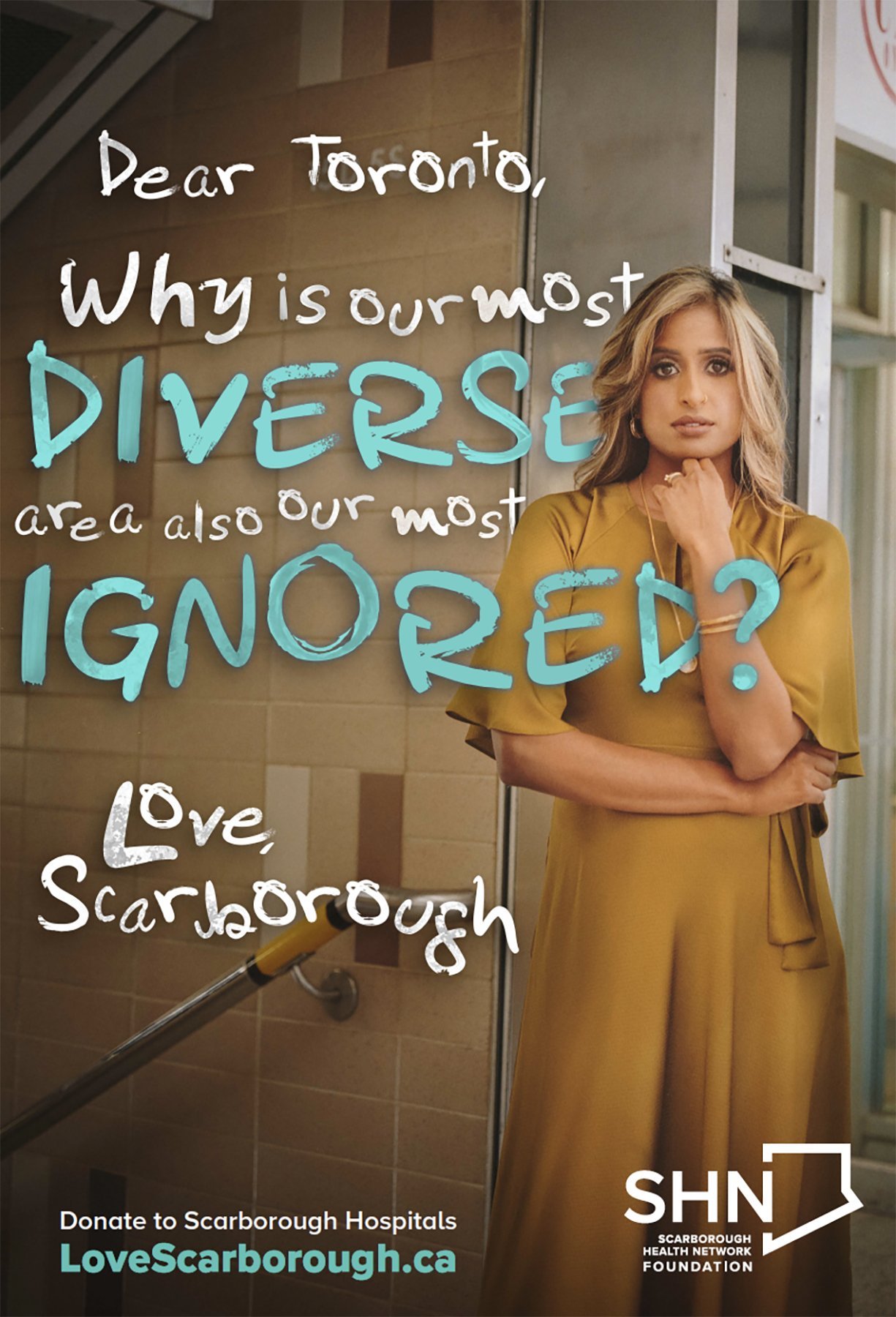 Scarborough Health Network (SHN) Foundation is excited to announce the launch of the Love, Scarboroughmarketing campaign. This campaign will directly support their $100 million fundraising goal to help close the healthcare gap.

Scarborough is calling on the City of Toronto to back them up. Scarborough accounts for 25% of Toronto’s population yet receives less than 1% of the hospital donations.

“Although Scarborough is the GTA’s most economically disadvantaged community and serves a catchment area of nearly 1 million people, our hospitals have been left behind. SHN receives only a small fraction of the hospital donations to care for our diverse and growing community. We’re doing incredible work with what we have, but we could be doing so much more,” says Alicia Vandermeer, President and CEO of SHN Foundation.

SHN is made up of three hospitals that serve one of the most diverse communities, not only in Toronto but the whole country. Scarborough is also home to a large number of new Canadians – who often speak a primary language other than English – and SHN serves a catchment area of over 832,000 people. SHN is committed to providing world-class, inclusive care across numerous disciplines for Canada’s most diverse community, but it’s significantly underfunded.

Today, SHN Foundation launched Love, Scarborough to kick off this historic donation push – the biggest in SHN’s history. The mass media marketing campaign aims to raise awareness for the need to close Toronto’s health care gap by driving donations not just from Scarborough, but across the GTA.

The campaign is an open letter from Scarborough to the rest of the Greater Toronto Area imploring them to help level the playing field. Throughout the campaign, the font that is featured was created from the real handwriting of 26 different individuals connected to SHN – one for each letter of the alphabet. On LoveScarborough.ca, people can learn about these people’s stories and even submit their own story using the font, aptly named “Scarborough Sans”.

The integrated campaign launches on January 10, 2022 and will be featured in TV, radio, cinema, print, and online. With the generous support of Ogilvy, who donated in-kind creative services, along with media partners Bell Media, Rogers Sports & Media, Maple Leaf Sports & Entertainment (MLSE), Toronto Star, The Globe & Mail,  MediaCom, Cineplex Entertainment, and Corus Entertainment, this campaign will stretch across Toronto.