Toy donations showcase the generosity of our community 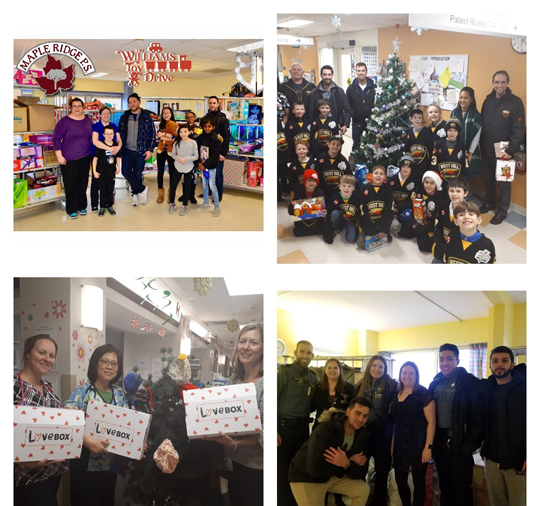 Our Paediatrics department has been overwhelmed by the kindness
of our community this holiday season!

So many families and groups have given back to our health
network with toy donations that will bring joy to children in our hospitals
over the holidays and all year long.

A huge thank you to the following:

The Williams Family Toy Drive. It started out as a life lesson to teach their children about the importance of giving back and has grown into an annual tradition. For the last five years, Byron, his wife Kelly, their 10-year-old daughter Avery and 6 year-old daughter Norah have been donating toys from their toy drive to our Centenary hospital where Avery was born. This year, they also received support from Byron’s longtime friend and Former World Boxing Title Challenger Brandon Cook, as well as Avery and Norah’s school, Maple Ridge Public School.

The West Hill Golden Hawks Minor Novice Select hockey team. Coaches for this team of 7-year-old hockey players conducted a toy drive to also remind the kids about the importance of giving back to their community.

Scarborough Town Centre (STC) Security Team. For the last four years, the STC Security team has run the “Guards for Gifts” toy drive, where mall tenants donate gifts that Security raffles off to raise the money to buy the toys.

The Super Sophia Project for their donation of 500 Love Boxes filled with toys and goodies for the Paediatric units across our three hospitals. Sophia was treated for leukemia in 2012 in the Paediatric Oncology Group of Ontario (POGO) satellite clinic at our Centenary hospital. Sophia’s family also helped to organize the funding and production of an end of treatment bell in the POGO clinic that children can ring when they complete their cancer treatment.

Bob Kidd and family, who have regularly donated toys before the holiday season to recognize the exceptional care their son Aiden received when he was born at Centenary 10 years ago.