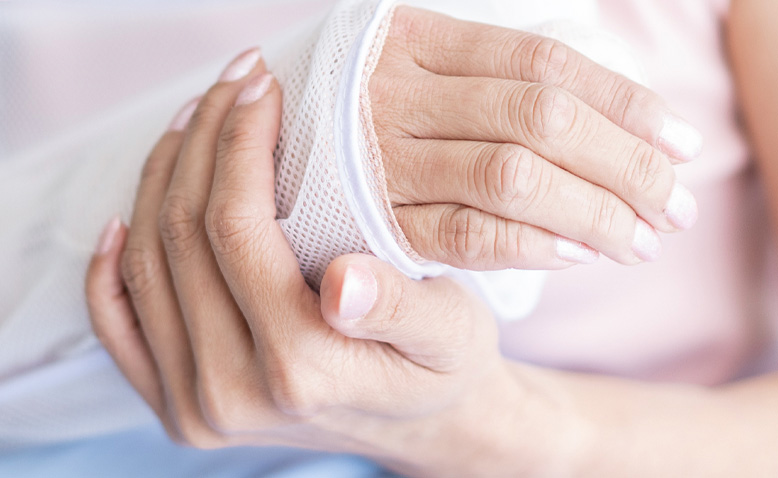 While on her usual afternoon stroll on a mild-April day, Oshawa resident Virginia March found herself reaching out to catch her body from hitting the ground after tripping on the path. Suddenly, a bone in her arm appeared to be dislodged. At first, she didn’t realize what had happened, which she now chalks up to pure shock.

“I wasn’t close to home when I fell,” she recalled. “There was a lump in my arm, but it was numb, and I couldn’t feel anything in that area of my arm, which was a really good thing. I don’t know how I would have gotten home otherwise.”

Her daughter drove her to Scarborough Health Network’s (SHN) General Hospital, where she was put in a temporary plaster cast.

She returned to the Fracture Clinic for an evaluation several days later, and discovered the seriousness of her injury. Her wrist was broken into pieces and she would need surgery to repair it—a journey to recovery that could take several months.

In Virginia’s case, it would only take one day for her care team to schedule her for an open reduction and internal fixation at SHN’s Orthopaedic Trauma Centre at the Scarborough General Hospital.

Scarborough’s Orthopedic Trauma Centre delivers dedicated care for urgent cases. Since opening in July, the Orthopaedic Trauma Centre has performed over 500 surgeries, including 300 day procedures. This new centre has been designed for patients like Virginia who don’t need a limb-saving surgery, but require an urgent procedure. Instead of waiting at the hospital to go to surgery, patients can be at home while their surgery is scheduled. This means fewer hospital stays and delays in after-hours care.

“We thought, wouldn’t it be better if we had an ambulatory clinic, or outpatient clinic, for orthopaedic trauma injuries like wrist, ankle, clavicle, shoulder, tibia, foot and wrist fractures,” said Dr. Warren Latham, corporate chief of orthopaedics and lead surgeon at SHN.

“Patients showing up at the emergency department can complete the forms for having a surgery, then return home and wait for our dedicated trauma team coordinator to call them when their surgery is scheduled. We know that kind of definitive care provides for a better patient experience, better patient outcomes, and enhanced quality of patient care.”

In the past, patients endured longer waiting periods and were usually placed on an emergency roster waiting for beds to open up.

“If you broke your ankle, for example, you would come to the emergency department. You might go home with a cast and come back to the Fracture Clinic later that week to see an orthopaedic surgeon, who would decide if you needed surgery on your ankle,” explained Dr. Latham.

“Then you would have to be admitted. You would be placed on the emergency roster and have your surgery at night.”

With the new Orthopedic Trauma Centre, patients receive defined surgical dates, so they know exactly who their surgeon will be; and, with timely access to specialists in sports medicine, hip and knee, upper extremity, spine, and foot and ankle surgery, they will be assigned the best surgeon for their needs.

SHN has also added several resources, including a hospitalist, physician assistant, physical therapist, and trauma team coordinator to further develop the program, while the orthopaedic trauma room enables flexibility for SHN to add elective cases that were previously cancelled during the COVID-19 pandemic.

For Virginia, all these dedicated roles were critical in providing her with a sense of understanding and safety.

Now in physiotherapy, Virginia is on the road to recovery with her wrist and arm getting stronger and gaining more range of motion. Thanks to SHN’s Ortho Trauma Centre team, she’s looking forward to getting back the independence she has been missing since her fall.

With a little laugh, Virginia remarked, “I can’t wait to be able to put on jeans or tights again!”