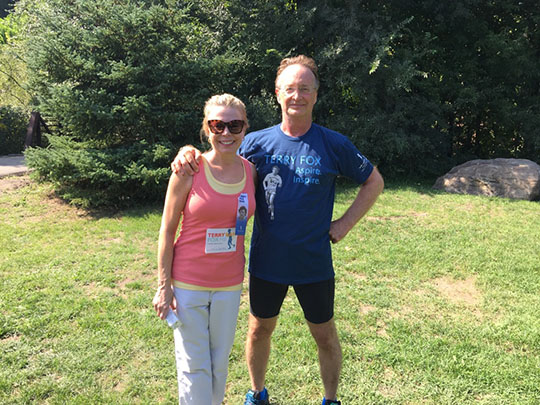 For nearly 30 years, Dr. Timothy Sproule has travelled the developing world to help those in need of specialized plastic surgery, donate equipment, and train other physicians.

However, on February 14, Dr. Sproule’s outstanding volunteer work and spirit of philanthropy earned him an extraordinary trip to Quebec City to receive the Sovereign’s Medal for Volunteers from Canada’s Governor General Julie Payette.

Part of the Canadian Honours System, the Sovereign’s Medal for Volunteers recognizes exceptional volunteer achievements from across the country and abroad, celebrating a wide range of voluntary contributions. Dr. Sproule, Acting Chief, Division of Plastic Surgery, Scarborough Health Network (SHN) is one of just six individuals who were honoured with the award this year.

“Dr. Sproule loves to heal and take care of people and his passion is unbelievable,” said Jan Holland, who has been Dr. Sproule’s receptionist for more than two decades and nominated him for the Sovereign’s Medal award.

“At the same time, he’s just such a humble man and I really felt the Sovereign’s Medal was something that would acknowledge the tremendous way he has given back throughout his career.” Jan and Dr. Sproule at the Terry Fox run in September 2016.

Dr. Sproule’s work in the developing world began in the early days of starting his practice as a plastic surgeon. From Guyana to Peru, Vietnam to India, Bangladesh to Bolivia, and Nepal to Ecuador, Dr. Sproule has donated his time and talents to perform cleft lip and palate surgery, burn surgery, and microsurgery. Working with a variety of organizations and through his own charity, The Canadian Reconstructive Surgery Foundation, he’s also been able to donate sophisticated equipment to improve care, and routinely shares his expertise to train the next generation of physicians.

“Tim is a gifted and dedicated surgeon who offers a warm and supportive approach to all his patients,” explained Dr. Neville Poy, who worked with Dr. Sproule at SHN’s legacy organization, The Scarborough Hospital, and who is also an Order of Canada recipient from the Governor General.

“What’s more, he’s a compassionate humanitarian who has helped countless numbers of impoverished lives and whose teachings have allowed surgeons far and wide to carry on his work within their own communities.”

But Dr. Sproule’s incredible story does not end with his work in the developing world. In the fall of 2015, he was diagnosed with colorectal cancer, which led him through an in-depth experience of the Canadian health care system from a patients viewpoint, receiving radiation, chemotherapy, and extensive surgery including both a colostomy and a urostomy. A significant amount of this treatment was provided by the staff at SHN in an exemplary compassionate fashion.

After recovery, true to his legacy, Dr. Sproule has chosen to share his unique experience as a “double ostomate” to help educate and empower others who have or who care for these conditions.

“I feel like I’ve been given a whole new lease on life and I want to do everything I can to put a stamp on my journey back,” said Dr. Sproule, who was appointed Chief of Plastic Surgery at SHN at the end of 2017, not long after he completed his cancer treatment and returned to a modified plastic surgery practice. “I am grateful to be pain-free and still be able to be somewhat useful.”

His “stamp” has included giving talks to ostomy and oncology nurses at SHN and Sunnybrook about being a double ostomate, and his cancer experience.

Amazingly, Dr. Sproule has also started to travel back to the developing world, having just returned from a volunteer trip to India just a week before he received his Sovereign’s Medal. He has maintained an academic appointment at the University of Toronto, lecturing on laser physics, safety, and techniques to resident physicians in the surgery program.

And if his professional achievements weren’t enough, he’s also training to participate in a triathlon next year.

“As a physician and as SHN’s Chief of Staff, it’s an inspiration to have Tim as part of our team,” said Dr. Dick Zoutman. “Our entire health network benefits from his remarkable strength and expertise.”

Jan admits that witnessing Dr. Sproule’s dedication to his patients, both at home and abroad, is often overwhelming just thinking about how many lives he’s changed for the better.

“If anyone deserves this award, he does and I could not be happier for him.”